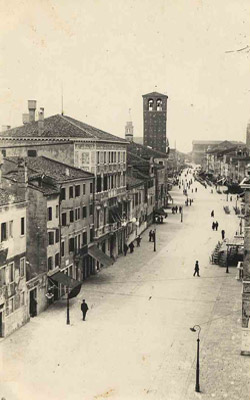 Chioggia is situated in the Venetian Lagoon and is the seventh district of the region by population.  According to the legend, the founder is a man that came from the sea, Clodio, who ran away from a fire in Troy and decided to settle in the lagoon. As a symbol of the town Clodia and as a reminder of his own, he choose a rampant lion.

During Byzantine and Roman times, it was inhabited but in the next years it became important due to its canals that granted links and trades with Istria and Dalmatia, without going through the open sea.

In the dark centuries Chioggia welcomed populations from Padua, Este and Monselice, threatened by the Barbarians and they started to develop two main activities: salt production and horticulture. As years go by, lagoon fishing developed first, followed by sea fishing next and the construction of typical boats, such as tartane and bragozzi, turning Chioggia into a rich and prosperous town in the XIV century.

In 1387 a conflict started between the maritime republics of Genoa and Venice; the Genoveses took over both Chioggia and Sottomarina for a couple of years and they left them almost completely destroyed. In the next centuries people started moving to Chioggia where a couple of buildings still remained, two of which are the Granaio Palace and the Cathedral. The land people lived on was very unsteady, subject to flood hazards, epidemics, famine and plenty of hand work. They then started building the Medieval town, with religious houses, churches and sanctuaries.

In 1866, after the third Independence War and after the Italian annexation of the Veneto region, the problems became more obvious for Chioggia: the lack of funding for public works, a fishing crisis and residents from Sottomarina demanding independence. Something changed at the end of the 1800s, when the first aqueduct was built and gas lighting made its way into the town, which was linked to Rovigo by the new train station. Major improvements happened in 1935 when the dams and a working and modern aqueduct were built.

Tourism and fishing are the most important activities nowadays, same as horticulture and commercial activities. 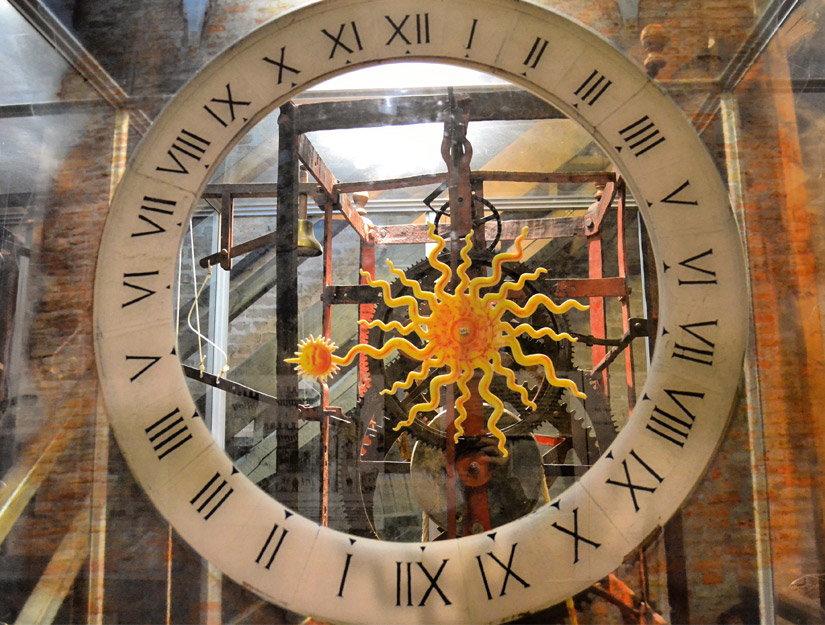 The Saint Andrea’s clocktower, reopened to the public in 2006, dates back to Byzantine and Roman times.
It houses a unique and rare clock, the oldest in the world, which is preserved in a glass display case on the last floor.

The six-story vertical museum displays a collection of photographs, maps and pocket watches to let the visitor relive the history of the town, of the Saint Andrea’s church and of the Clocktower. The last floor is the one worthy of all the steps: the medieval clock and the breathtaking view, where it’s possible to admire the lagoon and Chioggia from a very unique point of view.

This civic museum houses archeological and ethnographic collections, located in the former San Francesco Fuori le Mura’s convent, built in 1315 and then again in 1434.

Initially used as a military deposit and fruit market, it was turned into a three-story museum in 1997. The ground floor is dedicated to archeological finds; the first floor to the town historical archives; the second floor, the last one, focuses on the local Navy history and it houses a collection of canvases painted by local artists in different centuries. 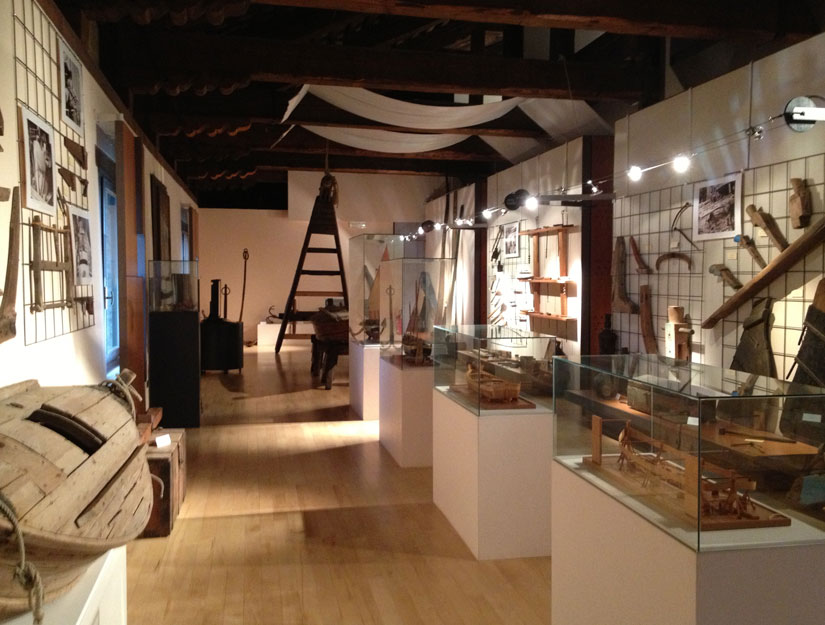 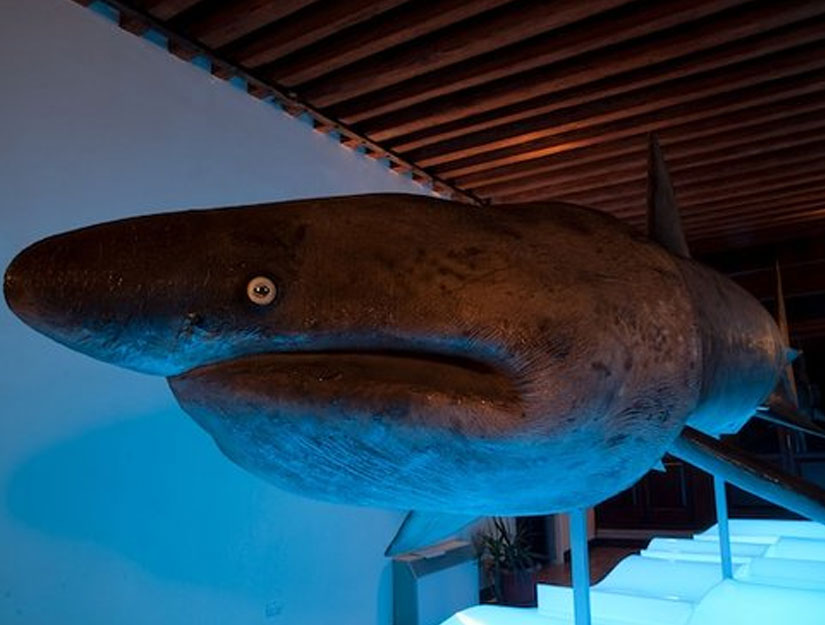 Museum of Adriatic Zoology Giuseppe Olivi
Situated in the Canal Vena’s Fondamenta, Palazzo Grassi is a 18th-century building, commissioned by the namesake family. During the years, it became a temporary headquarter of the town hall offices and later a hospital. At the end of the 90s, the town hall decided to fund restorations and in 2001 it became one of the University of Padua’s properties, which opened the Museum of Adriatic Zoology. You can see some Adriatic sea organism – so that you can learn more about their traits – and a female specimen of an elephant shark. It is considered a modern museum, housing one of the oldest and most important collections in Italy.
Ask for availability...
Vigo Bridge and Column

The Vigo Colomn is one of the most iconic landmarks of Chioggia and it is situated at the end of Corso del Popolo, next to the ferryboats’ dock. After years of restorations, it was possible to place it in its actual position. It is made of Greek marble and in the lower part you can see the bas-relief representing a winged lion to symbolize the Serenissima. The Marciano lion situated at the top of the column is also called “il gato de Ciosa” (Chioggia’s cat) due to its small proportions.

The Vigo Bridge is the city’s most majestic one, built in 1685 and made of Istrian stone and decorated with bas-reliefs of Santi Felice and Fortunato – protectors of the town – and the Annunciation. Also known as the Chioggia’s Rialto Bridge, it offers one of the wider views on the town. From the top you have a complete view of the Lagoon. 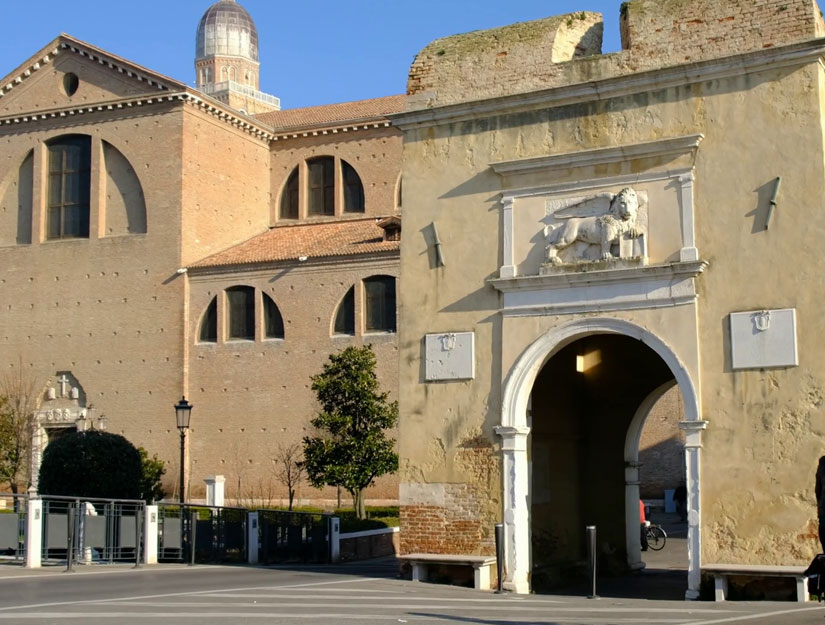 Garibaldi Gate
The Saint Mary’s Tower or Porta Garibaldi represents the access to the town, from which starts Corso del Popolo.

The original Gate, built for the first time in the 1530s, is not the current ones as it used to be crenellated. It was the main element in the town walls and was built again in the 16th century. It was subject to lots of restorations over the years: the houses to its sides were demolished and so were the doors. On the front a lion stands out, symbolizing the old maritime republic.

Palazzo Granaio is one of the oldest buildings in the city, built in 1322 and in Gothic style. At first, it was used as a wheat deposit and it survived the War of Chioggia. It stood over 64 Istrian stone columns, with the sole purpose to protect the supplies from water and humidity. At the end of the 19th century the columns were cemented and the close space became a storage place for fish.

Opened everyday but Monday, the best thing about the Fish Market is the local production that covers a wide range of products: soles, sea basses, sea breams, anchovies, crabs, barboni (similar to sea mullets) and much more.

The entrance to the red tent is recognizable thanks to the Portale a Prisca, designed by the sculptor Sartori from Padua. Initially made for a school, it was put at this entrance 7 years after its creation in 1947. It is a collection of allegorical scenes representing Prisca, Roman Emperor Diocletian’s second wife, who was also martyred under the Emperor Claudius. 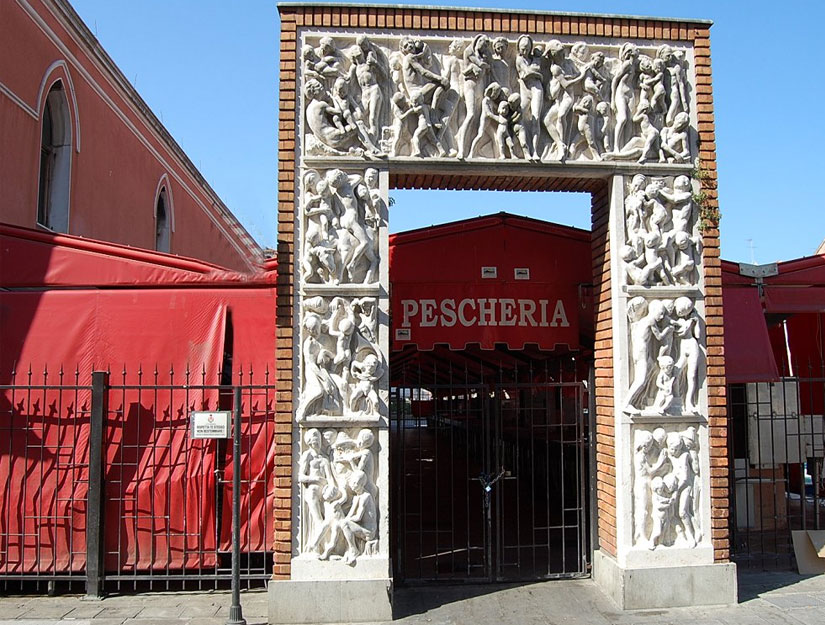 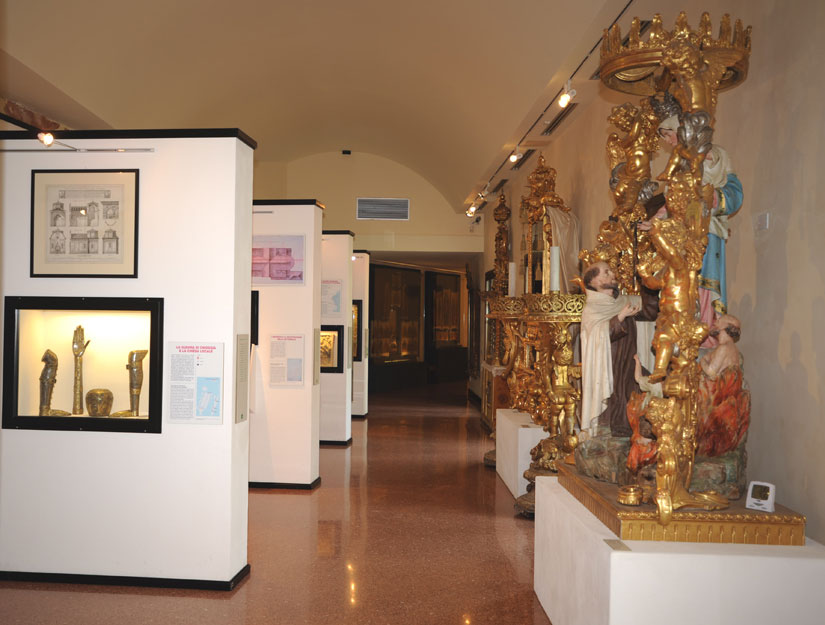 The Diocesan museum is situated in the Bishop’s Palace, dedicated to Santi Felice and Fortunato, Chioggia’s own patron saints. It is divided into 4 different sections where you can admire historical, iconographic and religious objects, such as painter Naccari’s canvases; laces, tolets and ex-votos are worth a visit as well.

Ask for availability...
× How can I help you?